Fortress Island is the stronghold of the Hyakki Empire. Depending on the media it has a different origin, in the anime it was simply a modified island but in the manga it was originally a spaceship owned by the Andromeda Country.

Fortress Island is able to move freely whether on the surface of the ocean and fly. It holds a massive number of both Oni and Hyakki Beasts. 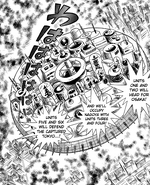