The Fat Minobi Pilot was one of three Oni sent to destroy Uzahra and the Atlanteans.

He was a short overweight individual with a bulbous nose, messy black hair and sunken eyes. He wore a black jumpsuit resembling feudal era shizoku like his other co-pilots.

He was very confident as well as sadistic, taking great pleasure in killing the weakened Atlanteans in the name of the Hyakki Empire.

With the Getter Robo G nowhere to be found but Uzahra still on the loose, the Minobi and its pilots were sent to track it down and destroy it. Upon finding the mechanical dragon, they proceed to kill the Atlanteans in stasis to prevent any potential threats to the empire. The fat pilot proceeds to burn one of the scientists when he confronts them. The pilot and his coworkers are then confronted by the weakened Getter Team and despite just coming out are able to kill the assassins. 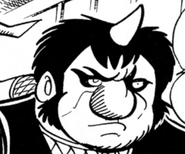 Rushing through the bushes 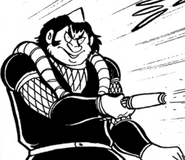