Emperor Gore III is the ruler of the Dinosaur Empire succeeding Emperor Gore (his father) and Empress Jatego. He is also the older half-brother of Kamui Sho.

Gore III resembles Gore including a similar headdress but has a darker color, has locks of black hair down the sides of his head, and wears a dark gown over his body. Gore also sports a crest on his forehead. He is dedicated to keeping the Dinosaur Empire in glory and is willing to work with past enemies of the empire, if and only so he can strike back later. While a purebred Dinosaur Person, Gore III lacks the same charisma of other rulers and he is actually afraid of Kamui usurping him.

Gore III tries to maintain polite, soft-spoken and regal attitude, but has hard time hiding strong emotions (much like his father). This is evident when he sees Kamui embrace his mother (as a result of Takuma's little well-calculated mischief) and makes infuriated grimaces in front of his subjects, and later, when he's very visibly terrified that Kamui might kill him. Quite unlike his father, Gore III seems to lack both confidence and bravery.

Gore III controls the empire given his high position, but as he lacks proper leadership skills, he is unable to get people on his side in times of crisis including Kamui's coup.

Gore III appeared when the Getter Team visited the Dinosaur Empire in their base. He and Hayato explain the alliance against the Andromeda Country to take out their common threat. When Kamui was alone, he and the rest of the empire no longer needed to hide their intentions of stabbing the Saotome Institute in the back once the threat is over. However when their mission was completed, Kamui had come back and had usurped Gore of his throne. Gore was stunned by this and even more terrified of Kamui acquiring a weapon that could not only destroy the Getter Robo but even humanity. He seems to have calmed down when Kamui tells him that he doesn't intend to physically threaten him.

In the anime, it's Gore III who makes a declaration of war to the humans, tricking them into believing he's still in charge. However, for some reason Kamui also shows up on the hologram, making it obvious that he supports Dinosaur Empire's third attempt to conquer humankind. What happens to Gore III afterwards is never specified; it's speculated that between last pre-credit scene and epilogue of the anime he managed to convince everyone - both his subjects and humans - that this failed war was purely Kamui's idea which he didn't approve of and followed only because he was forced to, reclaimed his throne and sentenced Kamui to lifelong imprisonment on Mars. 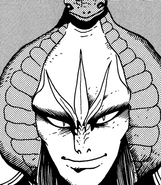