Emperor Gore (帝王ゴール) is the ruler of the Dinosaur Empire. In the initial invasion of the surface, Gore was seriously injured, forcing him back in order to recover and rise again. For most of the Shin Getter Robo vs. Neo Getter Robo OVA, he undergoes a mechanization process until being faced as the final enemy.

Gore has a similar height and body shape as his original manga counterpart including the iconic cobra-like hood on his head, but is given a more monstrous appearance. He has blue skin, encased in gray armor with a yellow and orange lower midsection worn with a cloak, yellow eyes with no pupils, and a mouth that features two jaws on top of one another. After becoming a cyborg, he gained a mechanical left arm, drill-like horns sticking out of his head, and has two purple spheres on his body, one serves as his left eye while another is on his groin armor.

As Huge Gore, he is given a more dinosaur-like appearance with a long tail, broad theropod-like legs, his cape becomes a pair of large wings, and a pair of bull-like horns sprout from his head.

Like many other iterations, Gore is a very prideful and boastful being, believing the Dinosaur Empire is superior to any and all civilizations and species especially by pointing out their flaws. To get rid of what he deems to be inferior, Gore charges in with armies of Mechasaurs to conquer and dominate the surface.

As emperor of the Dinosaur Empire, Gore controls all military assets and armies. His stubbornness and will have even allowed him to live through life-threatening injuries. After becoming a cyborg, he gains the ability to command a UFO that can protect him from intense Getter Rays with a barrier.

Fusing with the UFO however has him turn into the giant Huge Gore. This form allows Gore to utilize the barrier from before, shoot a beam from his mouth, and a black light ray from the side of his head. His strength have increased to the point of being able to swat the Getter Tomahawk of the Shin Getter away and even tear off an arm of the robot. His left arm can change into a hammer than can pummel most enemies and release needles. His tail can also be used as a close combat weapon and clinch enemies.

Emperor Gore in the initial invasion was at Manhattan when it looked as though the Mechasaurs would destroy the Getter Robo piloted by Musashi Tomoe. But when Musashi, detonated the robot's Getter Core and caused a meltdown, Gore was caught in the blast. Put into intensive care, Gore was given cybernetics over the next few years from a mysterious UFO the empire uncovered in the Antarctic. Once restored and the new Getter Team had unleashed the Shin Getter Robo, Gore came out to face them himself. Demonstrating his new ship's capabilities, when the Shin Getter put up more of fight, Gore transformed into Huge Gore. This form's power allowed Gore to push the Shin to its limits. However, when the pilots of the robot used the Getter Rays to their utmost potential, the Shin Getter assumed its God Getter form, effortlessly destroying Gore with a Getter Beam. 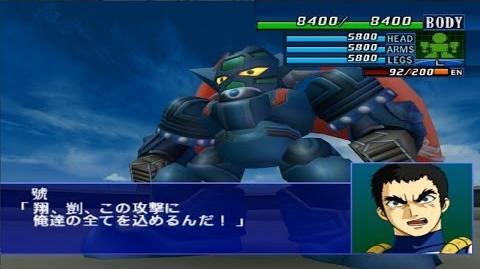