Emperor Gore is the leader of the Dinosaur Empire. Desiring the surface after over millennia of time in the Earth's magma, he leads the attack on major cities of Earth and the area where the Empire's greatest threat, the Getter Robo lurks.

Emperor Gore stands at least 6 feet high with a reptilian body, a cobra-like flap on his head, two-pronged toes with clawed heels, and wears a long cape with a ruffled top.

Gore is highly prideful believing that the Dinosaur People are superior to humanity in every way, having no qualms in using or getting rid of them. However, Gore is willing to admit when a threat is present including the Getter Robo and the Hyakki Empire. In fact, Gore was terrified just being near the Getter Robo due to the effects Getter Rays have on his kind. Yet after losing everything, he is willing to go out fighting his biggest fears. By his next appearance as a ghost in the Getter Rays, he is more supportive of humanity and Getter Rays knowing that there are bigger threats while under the effects of the Getter Ray energy.

As the ruler of the Dinosaur Empire, Gore has the full authority and command of its armies and their weapons. While Gore has usually just ordered his soldiers around to do tasks, he is a capable pilot, able to control a ship that can move on land and water.

Emperor Gore mostly remained behind the lines in the invasion of Earth issuing orders to his subordinates while at times looking at events that transpire such as the exploits of the Getter Team and the arrival of the Hyakki Empire. With the Hyakki Empire starting to advance at a quick rate and the Getter still operational, Gore orders an entire fleet of incomplete Mechasaurs to destroy the Getter and the Saotome Institute. With the aerial and ground forces devastated by the Getter's suicidal run, Gore goes to personally look at what remains of the Saotome Institute. What he and his soldiers see astounds them as an image of the thought to be destroyed Getter Robo is in front of them and even attacks. Gore desperately tries to fight off the image with his troops but is forced to escape after the projectors disengage and show the new Getter Robo G. Gore tries to get help from the Mechasaurus Navy but it was ravaged by a Hyakki Beast. Gore then calls for Bat, but Bat responds that with the magma levels dropping they had no choice but to leave Gore behind. Grieving, Gore decided to fight the Getter until the end but was ambushed by the Hyakki Beast before he got the chance by piercing his ship and body with sharp projectiles. The Getter Dragon held Gore's ship as he died.

At times Gore appeared as a spirit in the lower levels of the Saotome Institute where Dr. Saotome interacted with him as well as Emperor Burai, supporting the scientist's decisions to use the Shin Getter Robo to fight off the Andromeda Country as their attack would mean the end of Earth. 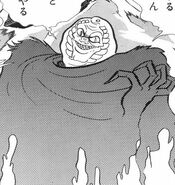 Gore at the start of the saga 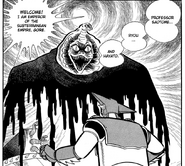 Gore announces himself to the Getter crew 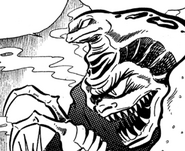 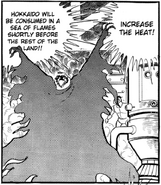 Gore burns the citizens of Hokkaido 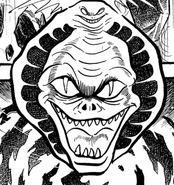 Gore as seen in Operation: Infiltrate the DInosaur Empire 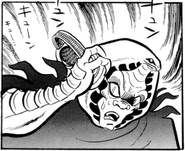 Gore listens to is new mixtape 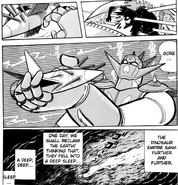