Dr. Tachibana is the co-creator of the Getter Robo Go as well as the father of both Sho and Shinichi Tachibana. He had a much smaller role in the manga than his anime counterpart.

Dr. Tachibana is virtually the same as his anime counterpart as an older man with graying hair, a mustache, glasses, average height, and always seen in a lab coat. He is determined to stop Prof. Lando's efforts in order to make sure his son's sacrifice was not in vain, putting his entire faith in the Getter as well as his daughter and group mates. He is however a pacifist and only wants to stop the fighting.

Dr. Tachibana is an accomplished scientist having been invited to Vega Zone to participate in the project. His forte seems to be robotics as shown by his part in the development of the Getter Go and when Prof. Lando attempted to force him into his army. 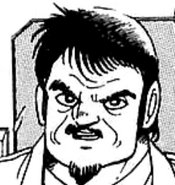