Dr. Saotome is the director of the Saotome Getter Ray Research Institute; the father of Tatsuhito, Michiru, and Genki Saotome; and the creator of the Getter Robo and some of its later models. He serves as an advisor to the Getter Team while researching the Getter Rays in an obsessive fashion.

Dr. Saotome is a short and broadened bodied older man with short and somewhat messy gray hair. He is usually seen with a beard, but at times has a moustache. He is always seen in a white lab coat with a shirt, tie, and pants. Rather than regular shoes and socks, he wears geta. For a while he wore a yellow pilot suit with a white helmet and clear visor when piloting a Getter Machine.

Dr. Saotome is an intimidating man likened to a mad scientist willing to go to extremes to get what needs to be done, sending armed thugs with the full intent to kill to test Ryoma Nagare and killing brainwashed staff and his own son to prevent further casualties. Despite this, he is far from heartless as he mourned the deaths of Tatsuhito and Musashi while having hope that things can be changed for the better. As he delved further into the effects of Getter Rays, Dr. Saotome gained an obsessive fascination with them.

As director of the Saotome Institute, Dr. Saotome is the leading expert in Getter Rays and its properties including the production of the Getter Alloy and Getter Robo. With help and research, he was able to improve on the Getter robots that allow it to perform better functions and perform acts that seem almost physically impossible such as travel at high speeds.

Becoming aware of the Dinosaur Empire during research on the Getter Rays, Dr. Saotome sends out scouts to find candidates to pilot the Getter Robo. He found his first choice in the form of a martial artist named Ryoma Nagare, but to assure his choice Dr. Saotome sends thugs his way to try and kill him. Ryoma manages to defeat the thugs and Dr. Saotome brings him to the Institute while avoiding the Dinosaur Empire. When Ryoma wakes up and demands an explanation, Dr. Saotome can only explain a few incidents before newts attacked the Institute and took control of the staff. Dr. Saotome kills some of the victims including his son Tatsuhito. Once outside after escaping the carnage, he tells Ryoma to be prepared while Michiru blames him for Tatsuhito's death. Ryoma however, notices that Dr. Saotome is actually mourning his son's death.

Dr. Saotome later has Ryoma recruit Hayato Jin and came in time with the completed Getter Robo to fight a Mechasaurus. Pursuing its head, they speak with the leader of the Dinosaur Empire, Emperor Gore. Realizing the situation and more battles Dr. Saotome helps oversee another potential pilot named Musashi Tomoe. But while Musashi didn't meet the minimum requirements, he locked Dr. Saotome in a supply closet while taking the doctor's pilot suit. Dr. Saotome oversees the battle and witness Musashi overcome the odds at the end by fighting back against an ambush and allows him to stay.

With the battles between the Dinosaur Empire and the arrival of the Hyakki Empire put everyone in an intense position so Dr. Saotome began work on the Getter Robo G, but as an army of Mechasaurs attacked time became shortened. Musashi however comes with a plan with Dr. Saotome who agrees to keep it a secret from the others. Musashi manages to decimate the army by sacrificing himself and the Getter. With the Getter G complete, Dr. Saotome helps in the attack on Emperor Gore's ship.

Dr. Saotome resumed his role as an operator for the Getter Team as Benkei Kurama was recruited as Musashi's replacement. He usually gave advice and insight for subjects like the space disease hoarded by a country, and the details of Atlantis. He was held up in the New Saotome Institute's basement along with his family and staff as the Hyakki Empire led by Burai the Great invaded Japan, and were rescued by Getter Robo G before the empire could breach the labs.

Dr. Saotome's final days are spent deep within the confines of his labs, where he starts to slowly lose his mind to the Getter Rays. The excess radiation from his final creation warn Saotome of the invading aliens, and he accordingly pressures Ryoma and Hayato to fight against these seemingly insurmountable foes. When he sees old foes such as Burai and Gore, he holds an oddly gentle conversation with the specters of his sworn enemies. His obsession with the Getter Rays, and his nonchalant attitude towards both Benkei and Getter Robo G being trapped inside of a cocoon of Getter Rays, cause Ryoma to distrust the old man. When Ryoma attempts to confront Saotome about his obsession, the aliens' ship decides to finally attack Saotome Labs which prompts the professor to urge Ryoma into piloting Shin Getter Robo once again. Saotome is last seen becoming one with the Getter Rays along with the rest of his staff and family as his facility is ruined.

The ghosts of the Dr. Saotome, Musashi and many others are seen as ghosts, and appear before Hayato to convince him to pilot the Shin Getter Robo. And as idea's as to what the Getter Rays actually are continue to develop, Saotome's spirit is once again seen.

As the creator of Getter Robos and the foremost pioneer in their research, Saotome can be seen as single-handedly responsible for every conflict in the Getter Robo universe due to every foe having some sort of animosity towards Getter Rays; with the exception of Prof. Lando who wished to conquer the world while he was still in an alliance with the Dinosaur Empire. Aside from this ...unique honor; Dr. Saotome would immensely influence Hayato to the point where he would not only build his own Getter Robos, but also head Saotome Labs. Hayato would eventually term Getter Robo Āḥ as 'the last of Saotome's machines', implying both a view of himself as Saotome's successor, and a profound respect for the old scientist. 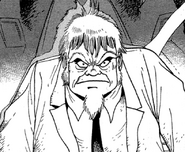 Saotome at the beginning of the saga

Saotome armed with a flame-thrower

The Dr. in Getter Pilot gear

Dr. Saotome all tuxed up at the start of Getter Robo G 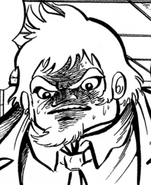 The Professor in Shin, sprouting a new style of facial hair