Director Galeli is the Dinosaur Empire's Prime Minister of Science, having been in charge of every scientific endeavor by the Empire including the Mechasaurus'.

Director Galeli is a short and old Dinosaur Man with a large cranium that he keeps covered in a headdress with spikes protruding from the sides. He is dressed in a gown that covers his body. Galeli does not speak much but is shown to be loyal to the Emperor following every order and instruction given.

As the Prime Minister of Science, Galeli oversees and develops all of the empire's technology including the Mechasaurus and the bio-weapons used by the empire.

Galeli was hardly ever seen, but was usually in the company of Emperor Gore and General Bat. His position was eventually succeeded by Professor Han.

Galeli's name likely comes from Galileo Galilei, an Italian physicist and astronomer that was dubbed as the Father of Observational Astronomy, Modern Physics, Science, and Modern Science. 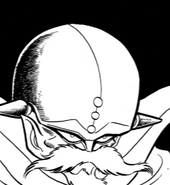 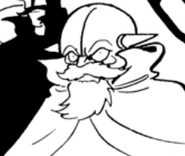