Dino Getter Robo is a Getter robot made for the 40th anniversary of Getter Robo. Originally released as part of the Metamor-Force model line, it was given its own manga in Dino Getter. In the manga, it was created by combining the technology of the Getter series robots and the Mechasaurus robots of the Dinosaur Empire.

The Dino Getter Robo was found by Saotome underground. Using his original research on Getter Rays and the technology of the Mechasaurus, Saotome developed special controls for the robot. It appears to have somewhat of a will of its own shown when it went to save a falling young Nagare. It is piloted by an individual with bionic implants that allow the pilot to wirelessly link up with the Getter and control it through movements. Like other Getter robots, the Dino Getter Robo is composed of three separate jets but the Getter changes forms depending on the main pilot even on the fly, seemingly transforming by reconfiguration. The model sets came with handguns with knives attached, as well as separate handguns and blades for additional weaponry.

The flight based mode with a pteranodon motif piloted by Nagare. Its humanoid state allows it to wield weapons like a Getter Tomahawk. It is able to change into a form based on a pteranodon that allows faster flight. It can absorb energy and when changing into its pteranodon form it can attack enemies with blistering speed.

The land based mode with a tyrannosaurus motif piloted by Jin. Its right hand is a tyrannosaurus head that can bite opponents in close combat and launch missiles while the left hand has the traditional drill. It also features another smaller pair of arms that can hold weapons like guns and are the primary arms in the tyrannosaurus state. The back features pulse rifles that it can use in its robot or dinosaur state. The dinosaur state when charged with enough Getter Energy can move at even higher speeds and mainly fights with its jaws.

The water based mode with a plesiosaur motif piloted by Tomoe. Its hands are a pair of heads with guns on top of them that are able to extend to a certain distance and latch onto targets. It is armed with a pair of missiles and an assault rifle on the back. The face on its chest can also open and close. It is able to change into a state that resembles a two-headed plesiosaur with a gun for a tail that is able to move through water easier.

Who or what created the Dino Getter is unknown but it was found by Saotome in underground caverns. Saotome found a way to control and utilize the Dino Getter as a weapon to fight against the Dinosaur Empire. However, he alone was not enough so Saotome had to recruit people with the bodies and will to not only pilot the Getter but also take the fight to the empire. One by one, Nagare, Jin, and Tomoe were chosen by the Getter during the fight against the empire. It's ultimate fate after the battle with Ghoul however is unknown.

Dino Getter vs a army of Mechasaurs 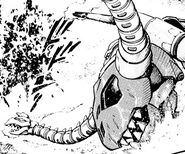 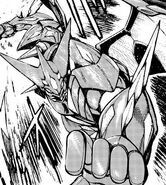