Captain Texas was an elderly officer and the commander of the Battleship Texas. He headed the Allied Robot Corps in the video game Getter Robo Daikessen !.

Captain Texas was an elderly man of the same height as Go Ichimonji and of a good built for his age. He had a calm and kind face, underlined by his puffy, white beard and mustache. He wore a Captain's cap which had an eagle like symbol at the front and it also had decorative lines throughout it as well as a leafy pattern on the edge of the cap.

Captain Texas was kind and gentle to every ally he has. However, he was capable of being strict and determined when required. He was also a very intelligent and level headed person, even in the face of danger. He was also capable of making difficult decisions of self-sacrifice. 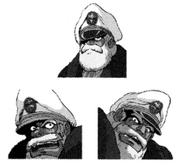