Captain Hoshi is a character in Getter Robo Arc. He is a Getter D2 pilot who was killed in combat against Zordo XX.

Captain Hoshi was a pilot for the Saotome Institute who engaged the Andromeda Country weapon, Zordo XX. During the battle he suffered from severe physical and mental stress.

he was killed by an attack from Zordo XX, causing his D2 to drop out of the air. 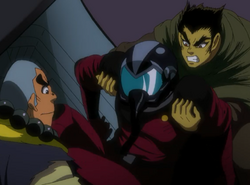 After his death, the D2 crashed into a landfill. It was opened by Baku Yamagishi, who along with Takuma Nagare removed Hoshi's body and took the D2 for himself.

Very little can be discerned about Captain Hoshi's character due to his minimal screen time. However we do see him begin to panic when in a tight situation and that Commander Jin considered him unfit to pilot The Arc, suggesting a lack of overall mental and emotional fortitude compared to more capable Getter Pilots.