Captain Danba was a high ranking soldier of the Dinosaur Empire, he led the defense for the Mt. Daibetsu hidden base with the Mechasaurus Boar.

Danba was a humanoid with thick and chunky scales covering his body, he had deeply sunken eyes, a lengthy tail and large clawed feet. He had battle armour a cape and a headress slightly similar to General Bat's.

Danba was incredibly loyal to the Empire, and he enjoyed seeing humans tourtured and in pain, he was incredibly cocky and arrogant which greatly angered Ryoma. 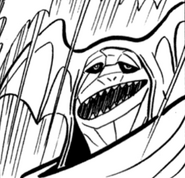