Bug (バグ Bagu) (Biogeocenosis(生態系) Unlimited(無限界) Genocidemachine(抹消機)) is a super-weapon designed by the future Andromeda Country to fight against the Getter Team and Getter Emperor from the past. It is based on data collected by the Hyakki Empire on Earth in the past. McDonald's entrusted the data and materials to Sho Kamui, and it is completed with the scientific power of the Dinosaur Empire. It has the ability to kill all of humanity and recreate the planet. [1]

A colossal mecha at least several hundred meters tall, with vaguely insectoid design and dome-like armor. Bug's enormous mass lies on broad clawed feet. Its shell is colored dark blue and it has triangle shaped pupils in its eyes.

When Professor Han is shown plans for Bug, he's shocked, even saying it could reform the whole Universe, not just the Earth. At the very least, Bug completely overpowers Getter Arc, severing its limb off.

Bug freely levitates, crossing large distances in no time. Whenever it walks, its sheer size and mass generate shockwaves. Bug seems to control all kinds of cataclysms, including thunderstorms, tornadoes, tectonic shifts and tsunamis. When first activated, Bug instantly starts to terraform Earth, turning it into an apocalyptic wasteland.

Bug's primary/surgical offensive ability is dark lightning bolts, powerful enough to incapacitate Getter Robo Arc. In addition to thick external armor, Bug has additional layer of protection in the form of nigh-impenetrable forcefield. To this end, none of any Getter Arc's forms has succeeded in inflicting damage on Bug.

Although it hasn't demonstrated it, it's very apparent that Bug's physical strength also dwarfs that of Getter Arc, and Kamui expresses confidence when he's about to battle Shin Dragon, of all things. However, it ultimately loses to Shin Dragon off-screen.

It first appears in the flash-forward at the beginning of Episode 12, in a manner similar to the events of the manga. It's properly introduced in the final episode; emerging from the whirlpool in the ocean, Bug effortlessly destroys any airborne forces humans sent to challenge it, then causes cataclysms on the planetary scale, so that even Earth's atmosphere turns crimson.

On the ruins of Tokyo, Bug is confronted by Arc that just returned from outer space. For most of their fight, Kamui remains idle, letting Takuma attack Bug and see the futility of his struggle. None of Arc's or its alternate forms' attacks can do any damage to Bug, though (ironically) Getter Kirik gets the closest - it manages to breach Bug's forcefield. It's still not enough to defeat or impede Bug, and it retaliates with lightning bolt, severely damaging Arc.

Then Shin Getter Robo G erupts from the ground behind Arc. Their subsequent fight is, unfortunately, not shown, but in the post-credits scene of the Anime showing that Kamui is seen being imprisoned on Mars by the Dinosaur Empire, implying that the Bug lost the fight with the Getter Dragon, while eventually putting the Hyakki Empire's efforts in vain. 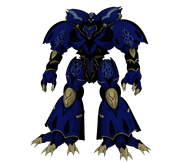 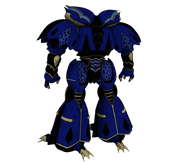 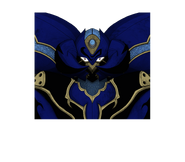