Boar was a piloted Mechasaurus used by Captain Danba in his attack against Getter Robo.

Boar was smaller than most Mechasaurs, and had a humanoid figure. He had dark casing on his body with reptilian arms and legs sprouting out. His head resembled a gas mask with four large pipes coming down off it.

Boar had a great deal of strength and could tunnel underground. 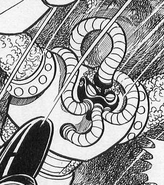