Benkei Kuruma is the new pilot for the aquatic and heavily armed based Getter Robo formation after Musashi Tomoe's death.

Benkei is a young man of similar build to Musashi but is more muscular. He has messy dark hair and usually wears street clothing. His pilot suit consists of gear used by a baseball catcher.

Benkei has a big heart and is generally happy go lucky unless one of his friends are in danger and is willing to risk his life for them.

Benkei possesses a strong body to pilot a Getter Machine having trained in baseball to the very limits of the human body. While not as competent in combat as Ryoma or Musashi, Benkei has shown to hold himself in a fight.

Benkei was recruited sometime after the death of Emperor Gore. He was usually paired up with Ryoma Nagare in the fight against the Hyakki Empire including when Hayato Jin was captured by his old gang or the numerous plans of the Empire. When Uzahra was uncovered, Benkei played his part in the fight against the Hyakki Empire when they tried to steal the robot body's head and when Uzahra awakened and overpowered the Getter Robo G. Captured by the Atlanteans and held to have his body used by them to inhabit Earth again, the process was interrupted by the presence of the Hyakki Empire. With the Atlanteans near death, they give the Getter Team a repaired Getter G along with Uzahra to fight back. The Getter Team liberates their friends at the Saotome Institute and help an uprising to save human captives. With help from Uzahra, the Getter Team fights the empire in space when fighting against Raoki and destroying their fortress with the Shine Spark. They bid Uzahra farewell as it takes the debris of the empire into space.

Benkei and the rest of the Getter Team returned to the Saotome Institute some time after the battle against the Hyakki Empire. He helped fight against assassins from the Dinosaur Empire in a remade model of the original Getter Robo until fighting against a revived Burai. Telling the Getter Team of who revived him after his defeat at the hands of the new Shin Getter Robo, Benkei and the others prepared for a fight. When the Andromeda Country began the attack, Benkei took the Getter Robo G and fought them off by diving deep underground in the Getter Dragon formation but lost control and ended up being consumed by the immense Getter Rays. Benkei's was replaced with Misa Ikari for his role in the Getter G. His death was mourned by Ryoma which began his doubt in Getter Rays and Dr. Saotome's obsession with it. 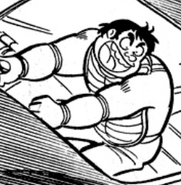 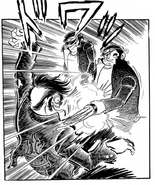 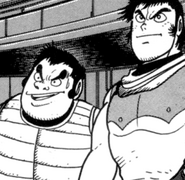 Benkei and Ryo
Community content is available under CC-BY-SA unless otherwise noted.
Advertisement