Beetle T23 is a quadrupedal small robot with four two-pronged limbs for crossing terrain. The head is covered with a dome-like headpiece with the eyes barely visible below the piece. The bottom of its body is armed with a balance stabilizer that allows its to spin like a top.

The Beetle has small automatic guns stored in the front had for long range. For close range combat the Beetle can closed in and spin rapidly towards the enemy. The manga version had rather difficult controls; but once fully mastered, the Beetle possesses immense maneuverability, able to avoid attacks and use its drill to strike at enemy weak points. In Daikessen the Beetle had the ability to repair any mech within two squares of range. 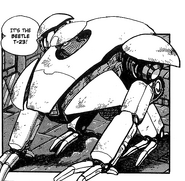 The Beetle showcasing its maneuverability.
Community content is available under CC-BY-SA unless otherwise noted.
Advertisement