Banko Benimaru (紅丸 バン子) is the daughter of a legendary mahjong player, Azana Benimaru, and is recruited by Dr. Shifukan to pilot the Getter Robo.

Banko has short, red hair with long sideburns, blue eyes, razor sharp teeth and has an athletic build. When Banko is powered up, her hair grows longer and incinerates.
She is initially seen wearing a sleeveless white hoodie, denim shorts, a hooded red poncho, and extra wide calf boots.
After training for 2 years at the Shifukan Institute, Banko was given a bodysuit designed with fingerless gloves, thigh-high boots, breast plates, and matching helmet.

Banko has a hot-blooded personality. She faces unfamiliar territory by going in head first without thinking. Despite being smart in mahjong, Banko isn't a very smart person in general, she constantly clashes with Takeo over her own intelligence. Because of her severe addiction to the game, she can't stand being interrupted from eating and playing mahjong.

Banko is the main pilot of Getter Honghu. Her father was a top-notch mahjong player, and she, herself, is also quite skilled at it. Banko also excels in hand-to-hand combat, and can beat up human-sized Atlanteans with only her bare hands. 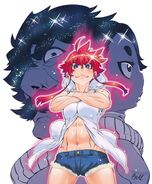 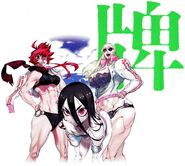 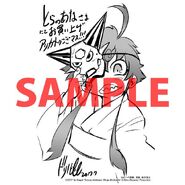 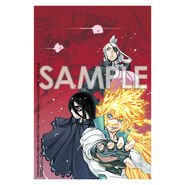 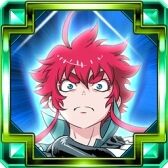 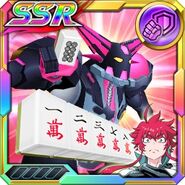 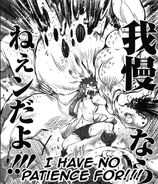 Banko and her father

About to pilot Getter Honghu 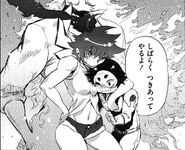